Home Articles Meat Free Monday – What Difference Will it Make?

Sir Paul McCartney along with a whole host of stars has called upon people to go meat-free once a week by designating Monday as a “Meat Free” day. Sir Paul’s call has been supported by his daughters, Stella and Mary McCartney and also backed by Coldplay’s Chris Martin, Hollywood stars Kevin Spacey and Woody Harrelson and actress Joanna Lumley. 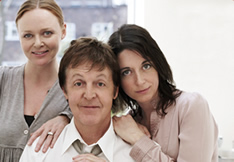 In launching the campaign, called “Meat Free Monday”, Sir Paul said: “Many of us feel helpless in the face of environmental challenges, and it can be hard to know how to sort through the advice about what we can do to make a meaningful contribution to a cleaner, more sustainable, healthier world.

“Having one designated meat-free day a week is a meaningful change that everyone can make, that goes to the heart of several important political, environmental and ethical issues all at once.”

He added: “We should care about climate change because if we don’t, we are going to leave our children and their children in a hell of a mess.”

Of course, none of this will come as a surprise to the estimated 250,000 vegans (and many vegetarians) in the UK who have long sought to highlight the environmental damage that the farming of animals causes.

According to the United Nations Food and Agriculture Organisation, meat production is responsible for 18% of greenhouse gas emissions. This compares to an estimated 13% from transport, which has long been the main focus of campaigns to reduce emissions.

So what difference can the Meat Free Monday campaign really make?

It is estimated that each person who stops eating meat for one day a week will reduce their carbon footprint by 68928 pounds of CO2 during the course of one year.

Certainly having the high-profile backing of Sir Paul and other celebrities will assure that the campaign is well covered in the mainstream media and hopefully it will encourage a number of people to think about trying a meat free diet for one day a week thereby reducing their CO2 emissions, if only in the short term.

Any longer-term benefits though must come from the realisation and acknowledgment that transport alone is not to blame for climate change and that the way we breed and exploit animals for our own use is damaging the Earth to an even greater degree. If the media starts to focus consistently on the part that farming of animals, both for meat and for the dairy industry, has to play in climate change then we might see a more subtle, but long-lasting change in attitudes towards the use of animals.

There will always be a percentage of selfish individuals who will choose to consume animal products because “they have always done so” and it is “their right” to continue doing so, but once the link between consumption of animal products and global warming is firmly established in the consciousness of the general public it will begin to influence the buying habits of many.

The purchasing decisions of individuals need to be affected in a similar way to that seen in the car market over recent years where gas guzzling cars are now increasingly seen as an irresponsible choice and cleaner, greener vehicles have become more in demand. 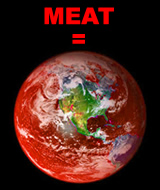 It may therefore be that the direct effects of the Meat Free Monday campaign are not immediately obvious or even discernible. However, the very fact that it has highlighted the part that livestock farming is playing in climate change and again brought this to the attention of the wider public can only serve to cement this link. Once the buying of a piece of meat is universally seen as wasteful and damaging to the planet, the need to adopt an animal-free diet will become obvious to a much larger number of people.

More information on the Meat Free Monday campaign can be found here – www.meatfreemondays.com